Cannabinoids for Cancer Symptoms and Side Effects of Treatment

The problem with the way we treat cancer is that conventional treatments harm the body while destroying cancer. The already weakened body takes a beating in order to get rid of the disease. A patient needs good nutrition, rest, and even exercise in order to tolerate chemotherapy, radiation, and recovery from surgery. But the side effects of conventional treatment make it difficult, sometimes impossible, to maintain the most basic health standards.

Cannabis is a very effective treatment for conditions commonly associated with chemotherapy, such as vomiting and nausea, chronic pain, and insomnia. Neuropathic pain, in particular, is a major side effect of chemotherapy. Studies conducted on animals have shown that the development of neuropathic pain can be inhibited by cannabinoids.

Cannabinoids can also serve as an adjunct to cancer treatments with fewer chances of a drug interaction. Additionally, cannabinoids are useful for patients with terminal cancer. They offer palliative care benefits at the end of life.

Studies on animal models have shown that cannabinoids have anti-cancer effects. Also, there’s a lot of evidence to show that cancers in humans respond positively to treatment with cannabinoids.

A number of patients have reported the cessation of tumor growth and development. Others have experienced a full remission of cancers in the course of using cannabis extracts.

Such powerful effects can only be achieved by some patients at a dose higher than that required for just relief of the symptoms. The usual dose administered is 200mg – 2,000mg cannabinoids daily; this is equivalent to 1-2 ounces of herbal cannabis administered weekly.

When using higher doses, it’s important that a physician supervise the treatment to prevent the occurrence of side effects and interactions with conventional cancer treatment. Though risks are associated with all medical treatments, cancer treatment with cannabis at high doses is non-lethal and very safe, safer than chemotherapy. However, the efficacy of high-dose cannabis for cancer treatment in humans is yet to be studied.

What Are Cannabinoids, How Do They Work?

Cannabinoids are chemical compounds that have a wide range of therapeutic effects. They are produced in three main places:

Cannabinoids work by activating their own receptors (CB1 and CB2) in the endocannabinoid system (ECS). The transient receptor potential vanilloid type 1 (TRPV1) has been described as an additional receptor target for several cannabinoids. In studies, cannabinoids have also been observed working in receptors other than their own specific cannabinoid receptors.

The ECS is a network of receptors in your body involved in the function of the immune system, the central nervous system, and various organs. It’s responsible for regulating appetite, pain sensation, mood, memory, sleep, neuroprotection, and homeostasis (your inner balance and wellbeing). It is believed that when you address something out-of-whack in the ECS, you can get at the problem, not just the symptom.

That being said, we can tell you about the very promising research that has been done so far, and also about documented anecdotal evidence.

Anecdotal evidence should not be dismissed. Many patients have reported tumor reduction after using some form of cannabis. While incidents of reduced tumors with cannabis use does not mean that cannabinoids cure cancer, many doctors agree that it’s important to gather this information and report it, in order to drive research.

Disregarding these incidents, however, is a mistake—one that Dr. Sanjay Gupta admitted in 2013, saying what many doctors, legislators, and average Joes do once they see how cannabinoids can help patients.

“I was too dismissive of the loud chorus of legitimate patients whose symptoms improved on cannabis. … Instead, I lumped them with the high-visibility malingerers, just looking to get high.”

The following are just a couple of cases shared at an annual meeting of the International Cannabinoid Research Society in 2012. In both patients, cannabis oil significantly reduced cancerous tumors.

An infant with glioma

A doctor in San Diego reported a 90% reduction in the size of an infant’s brain tumor.  This took place over the course of a year, with parents applying hemp oil to the baby’s pacifier before nap time and bedtime. See the image shared by the doctor below. 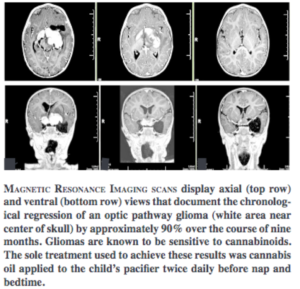 (Image and caption from O’Shaughnessy’s—The Journal of Cannabis in Clinical Practice, winter/spring 2013.)

After using cannabis oil along with chemotherapy and diet, this patient’s advanced stage lung cancer was reduced by 50 percent. She had surgery to remove the remaining tumor, and a CT scan after revealed no remaining cancer.

How a patient chooses to fight cancer and ease their symptoms from the disease and the treatment side effects, is a very personal decision that is perhaps best made in the care of physicians and loved ones, and after considerable research.

As this 2016 evaluation of cannabinoids as anti-cancer agents advises, while in vitro studies may be encouraging, in vivo may be where it’s at when it comes to preclinical studies. In vitro studies often use human cancer cells, but outside the human body, in laboratory cell cultures. These models may not adequately mimic tumor growth and metastasis. In vivo, or preclinical animal models are a mainstay of preclinical cancer research because of their fairly predictable tumor growth.

According to a 2014 review of cancer and cannabinoid research, several preclinical studies suggest that cannabinoids have anti-cancer effects in vitro against several types of cancer, including:

Many of these findings were also supported by in vivo, or animal model studies. What follows are a few examples.

According to this 2012 study on cannabinoids and breast cancer, experimental evidence accumulated during the last decade supports that cannabinoids possess anticancer activity. The researchers found that tumor growth, angiogenesis and metastasis are hampered by cannabinoids in mouse models of cancer. And they suggested that cannabinoid-based medicines may be useful for the treatment of most breast tumor subtypes.

The data from another 2012 study showed that cannabinoids inhibit prostate carcinoma growth. Results were taken from in vitro and animal models. Researchers suggested that “non‐THC cannabinoids, and CBD in particular, (much like THC, but without the typical psychotropic effects of this compound) might provide the bases for the development of novel therapeutic strategies for the treatment of prostate carcinoma.”

In 2003, researchers found that cannabinoids inhibited angiogenesis of malignant gliomas in mice. In English: cannabinoids blocked the formation of new blood vessels in brain tumors. Another study in 2013 showed similar results on mice using THC and CBD microparticles.

In a 2015 study, after giving THC and a THC/CBD mixture to mice with melanoma, researchers reported “inhibited melanoma viability, proliferation, and tumor growth paralleled by an increase in autophagy and apoptosis compared with standard single-agent temozolomide.”

Autophagy is the body’s way of cleaning out unwanted cellular debris, and apoptosis is programmed cell death. In these instances, cannabinoids seem to have a knack for kick-starting the body into warrior-mode.

What the National Cancer Institute (NCI) Has to Say

The NCI is part of the National Institutes of Health (NIH), which is one of 11 agencies that are part of the U.S. Department of Health and Human Services. These facts were taken directly from the NCI’s page on cannabis:

The Political Dynamics of Cannabinoids

According to the American Cancer Society, well over a half million people in the U.S. will die from cancer in 2019.

We know that cannabinoids in animal studies have “killed” cancer cells. Would that not make anyone—especially someone who has lost a loved one, watched someone go through cancer, or who treats patients daily—ask why we are not studying this specific potential of cannabinoids with the urgency that cancer demands?

The answer is political. All one has to do is look at the three facts above to understand what is happening. Synthetic drugs are man-made, not naturally derived. So, technically, cannabis is not used to make them. Therefore, the FDA approved two drugs—which, by the way, are as psychoactive as smoking marijuana—so that a pharmaceutical company could replicate THC and sell it as an antiemetic (prevent nausea and vomiting) for patients enduring chemotherapy.

And these are the reasons that research and development of cannabinoids has been so limited. The government refuses to remove them from Schedule I status and the FDA has not approved them. These persist despite the already known benefits of cannabinoids on many diseases and the real possibility that they could kill cancerous tumors. It is easy for the government to do this when the public is not educated about cannabinoids.

But once they are, how could there be nothing but outrage?

The Nature’s Breakthrough educational resource is just one of the ways The Hemp Haus practices its sincere commitment to and passion for educating people about CBD and helping them find the right, high-quality product based on their needs,

Where to Buy High-Quality CBD Products:

For pain, insomnia, anxiety, and more …

EFFECTS OF CANNABINOIDS ON PARKINSON’S DISEASE

EFFECTS OF CANNABINOIDS ON HEARTBURN

So glad to see you want more life-changing content!

Want to be the first one to receive the new content?

Enter your email address below and we'll send you the updates straight to your inbox.

Thank You For Subscribing

This means the world to us!

Spamming is not included! Pinky promise.